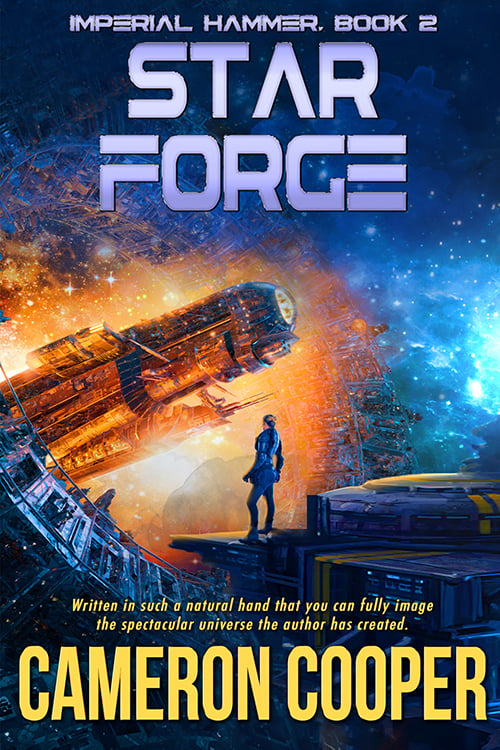 Danny is trapped in a fragile relationship with the self-aware interstellar array which calls itself Noam.

The array provides transport and communications. Without its cooperation, the Carinad Empire would collapse, stranding billions of people and causing chaos and death.

Danny Andela, a former Ranger known as the Imperial Hammer, is the only human the array trusts. Danny’s work to keep the array happy and minimize its deadly temper tantrums is draining. Worse, other humans distrust her because of her association with the array, including the crew of her one-of-a-kind ship, the Lythion.

Broke and alone, Danny faces a new peril: The array may not trust her, afterall…

Check out the full series at Cameron’s Site.

Praise for The Imperial Hammer series:

I greedily read in this in one day. You will want to as well.

Lots of action and a boatload of twists and turns that grab your attention and won’t let go. It has kept me up way past bedtime!

This is a read that really sucks you in!

Excellent characters, twists and turns throughout.

Written in such a natural hand that you can fully image the spectacular universe the author has created.

Early reviews for Star Forge itself:

The story has plenty narrow escapes and battles as well as complex double, or maybe triple crosses.

Loads of new twists that grab you and pull you right along. I couldn’t stop reading!

Disaster after catastrophe is closely following Danny and her crew. Someone very powerful is trying to destroy her!

And Cameron has let me know that book three, Long Live the Emperor, is already written and coming out in July! Very quick, good on you Cameron!

Check out his site here and go support an independent author!

This site uses Akismet to reduce spam. Learn how your comment data is processed.